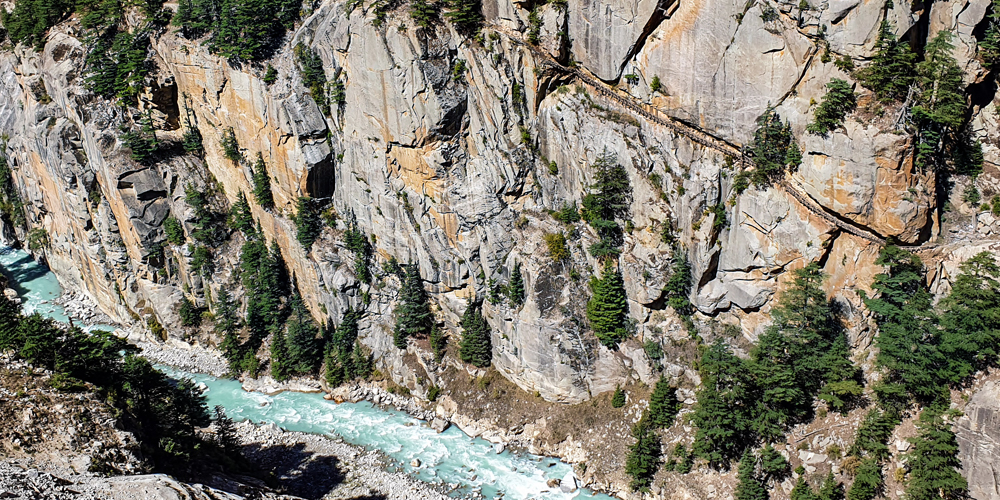 Gartang Gali, one of the most thrilling and exciting treks in Uttarakhand's Uttarkashi district, was opened to visitors and tourists in 2021 after 59 years. Located in the picturesque Nelong Valley near the Indo-China border, the 150-year old Gartang Gali is a 136-m-long wood-lined stairway that is said to have been built by Peshawari Pathans, who created an architectural masterpiece by cutting the granite of a vertical rock face. This route was traditionally used by merchants trading between India and Tibet. It was damaged over the years after it fell into disuse following the Indo-China war in 1962.

Painstakingly reconstructed, the 1.8-m-wide bridge, perched at around 3,352 m (11,000 feet), challenges even the most enthusiastic adventure-seeker. Hanging from the rocky ledge, it overlooks the picturesque Nelong Valley and the flora and fauna, while way below rushes the Jadh Ganga river! The around 2.5-km trek through dense forests leading to Gartang Gali is arduous but all the strain is washed away the moment you walk up the steps.

Interestingly, it is said this is the bridge that Austrian climber Heinrich Harrer (of “Seven Years in Tibet” fame) had used to escape to Tibet from India, during World War II. His story later inspired the Hollywood film of the same name starring Brad Pitt. For more information, Click here

Nelong Valley is accessible for tourists between April 15 to November 15, which is parallel to Gartang Gali.

Rishikesh and Dehradun are the nearest railheads to Uttarkashi (about 200 km away). Taxis and buses are available at both these railway stations.